CAJAS’ Round table on Thematic Issues 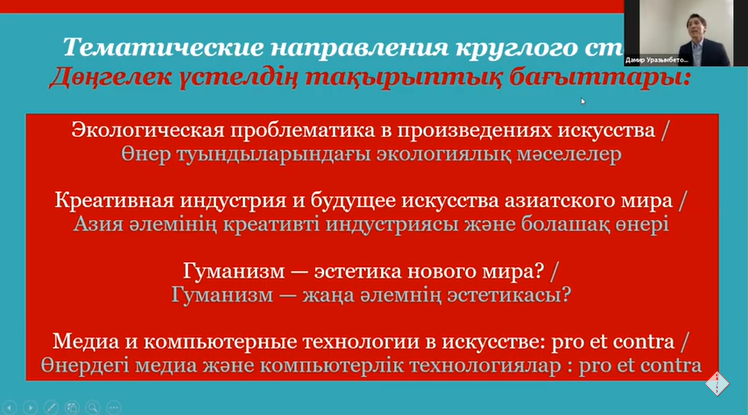 On October 20, 2021, the Academic-Editorial Department of the T. K. Zhurgenov Kazakh National Academy of Arts held an international round table. The agenda of the round table was to discuss thematic areas for 2022 for the international scientific journal Central Asian Journal of Art Studies, which is included in the list of editions of the Committee for Control in the Sphere of Education and Science in the direction of ‘Art’.

1. Environmental issues in works of art

2. Humanism — aesthetics of the new world?

3. The creative industry and the future of Asian art

The round table was attended by teachers and scientists from the following universities and research institutions:

At the round table, the speakers noted the timely and topical designation of problems by the CAJAS magazine, which have matured both in society and in scientific discourse. Some participants expressed a desire to participate in joint research projects, as well as prepare their own scientific research for the thematic issues of CAJAS in 2022.

The CAJAS editorial staff would like to thank everyone for the ideas expressed at the round table and wish all colleagues from universities fruitful scientific creativity.