“Cinema and Television at the present stage. National and global context of changes: problems trends, prospects” 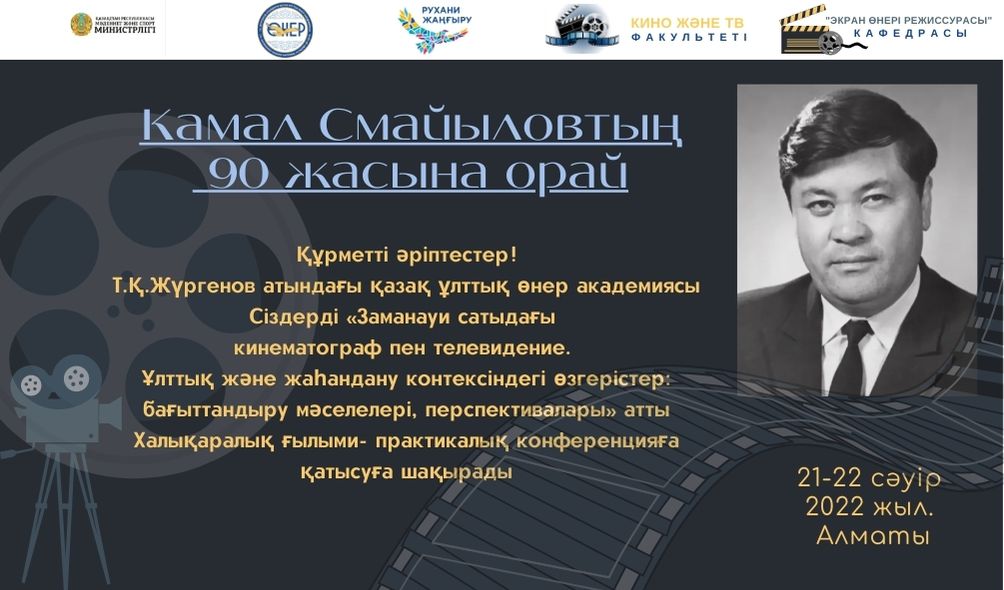 “CINEMA AND TELEVISION AT THE PRESENT STAGE. NATIONAL AND GLOBAL CONTEXT OF CHANGE: PROBLEMS TRENDS, PROSPECTS”, dedicated to the 90th anniversary of Kamal Smayylov

Kazakh National Academy of Arts named after T. Zhurgenov invites you to take part in the International scientific and Practical Conference “Cinema and Television at the present stage. National and global context of changes: problems trends, prospects” dedicated to the 90th anniversary of Kamal Smayylov, which will be held on April 21-22, 2022 in Almaty.

The following areas are included in the work of the conference:

The academic staff of universities, employees of scientific and educational institutions, undergraduates, doctoral students, regardless of the country of residence, can take part in the conference.

Requirements for the design of materials

The text of the article, ranging from 5-12 pages, should be typed in a text editor Microsoft Word:

The number of authors of one article should not exceed 3 people.

In the center, the title of the article is written in capital letters in bold. After one interval, the surname and initials of the author. On the next line in italics – the name of the organization, place of work or study, city, country and on the next line – the email address (e-mail).

The main text begins in one line. The text should be aligned to the width. References to sources are given in square brackets, a list of them (under the heading “Literature”) is given at the end of the article in order of mention.

The Organizing Committee accepts applications for participation and materials by e-mail gainijamal_ulitau@mail.ru

until March 15, 2022. Files should be named according to the surname of the first author, for example, “Popov, section 3”. Only one article is placed in one file.

The electronic version of the collection and the certificates of the conference are sent to the authors within 25 working days from the date of the event. The conference materials will be available in electronic form on the website www.kaznai.kz .

The collection will be assigned an ISBN.

Materials submitted later than the specified deadline or not designed in accordance with the requirements will not be accepted for publication.

Correspondence with the organizing committee is conducted only at the specified email address.