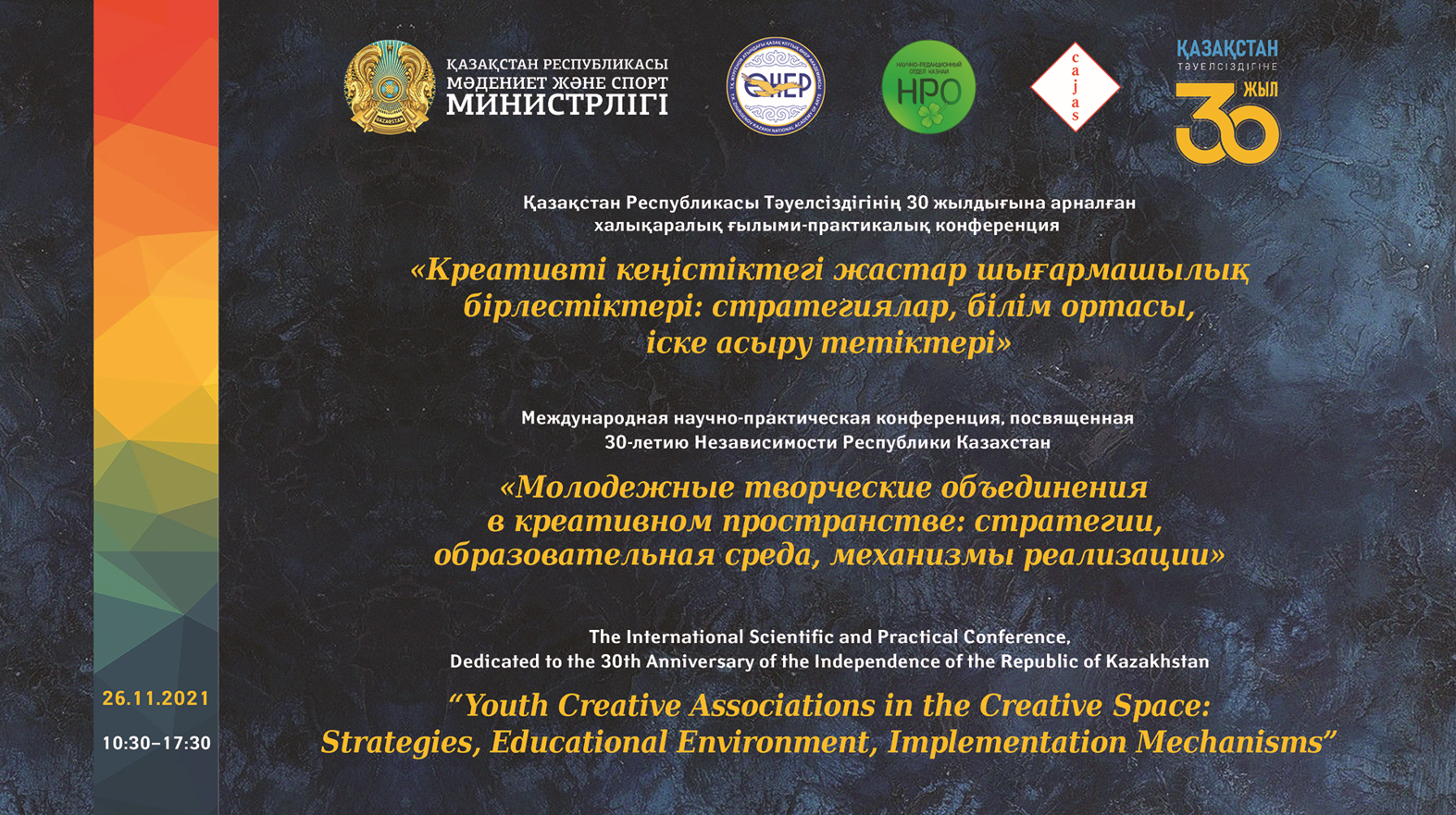 On November 26, 2021, the T. K. Zhurgenov Kazakh National Academy of Arts held in a mixed format an international scientific and practical conference on «Youth Creative Associations in the Creative Space: Strategies, Educational Environment, Implementation Mechanisms» dedicated to the 30th anniversary of the Independence of the Republic of Kazakhstan.

The organizers were the Academic-Editorial department and the Department of Art Management and Production, T. K. Zhurgenov Kazakh National Academy of Arts.

The purpose of the conference was to determine the special significance of the young generation in the development of culture as a branch of the modern national economy.

The plenary session was attended by

as well as scientists, teachers, doctoral students, undergraduates and students.

Acting rector of T. K. Zhurgenov KazNAA Sharipbek Amirbekov read out a congratulatory letter from the Minister of Culture and Sports of the Republic of Kazakhstan Aktota Raimkulova: “Kazakhstanis of a new era. There are many talented, creative, energetic and purposeful youth in our country. It is especially pleasant to see active and successful young people who work in large companies, make world-class scientific discoveries and receive professional recognition in various spheres of life. I believe that this international conference will become an important milestone for further successful activities in the creative industry”, the congratulatory letter says.

The next speaker was Elnur Beisenbayev, member of the Committee for Social and Cultural Development of the Mazhilis of the Parliament of the Republic of Kazakhstan: “I believe that the creative industry is one of the fastest growing clusters of the world economy. Today, the art world is developing rapidly thanks to the latest technologies of integration and media in the creative economy. And his main victory is the absence of borders. That is, in the ease of entering foreign markets. The number of people employed in the industry is constantly growing and is an important component of the creative industries in the fields of architecture, art, design, fashion, film and television. I believe that in working with young people who are the direct driving forces of this field in today’s academy, we must first define what the creative economy is and what it involves. I understand that the creative industry is not a wall or iron, it is an opportunity to be creative. The contribution of universities is very important here”.

Kaysar Sarybayev, head of the Department of Creative Industries of the city of Almaty spoke about the work being done in this direction. “The development of a creative economy is a prerequisite for the strategy of any metropolis. In Almaty, one of such big cities, we are actively building a dialogue with all representatives of the creative sphere. We have a creative industries council. It includes leading representatives of the arts – musicians, producers, directors and other creative people. The Creative Industries Department has introduced financial and creative support measures. Also on December 7, we will hold a job fair. That is, given the large number of unemployed in this area, we have combined the efforts of the business sector, our own employment center. In the future, anyone will be able to find a job by showing their talent”, he said.

The event continued with the reports of the participants: entrepreneurs, creative youth, teachers and undergraduates, who analyzed the trends and directions of development of the creative industry and shared recommendations for the areas of creativity, education and the economy.

The Academy thanks all participants for the reports and articles sent for the conference and looks forward to further cooperation!

Organizations participating in the conference:

International scientific and practical conference “Choreographic art and professional education in the context of modernity” which takes place 20-21ST October 2022.