“Transformation of National values in modern stage and screen art” 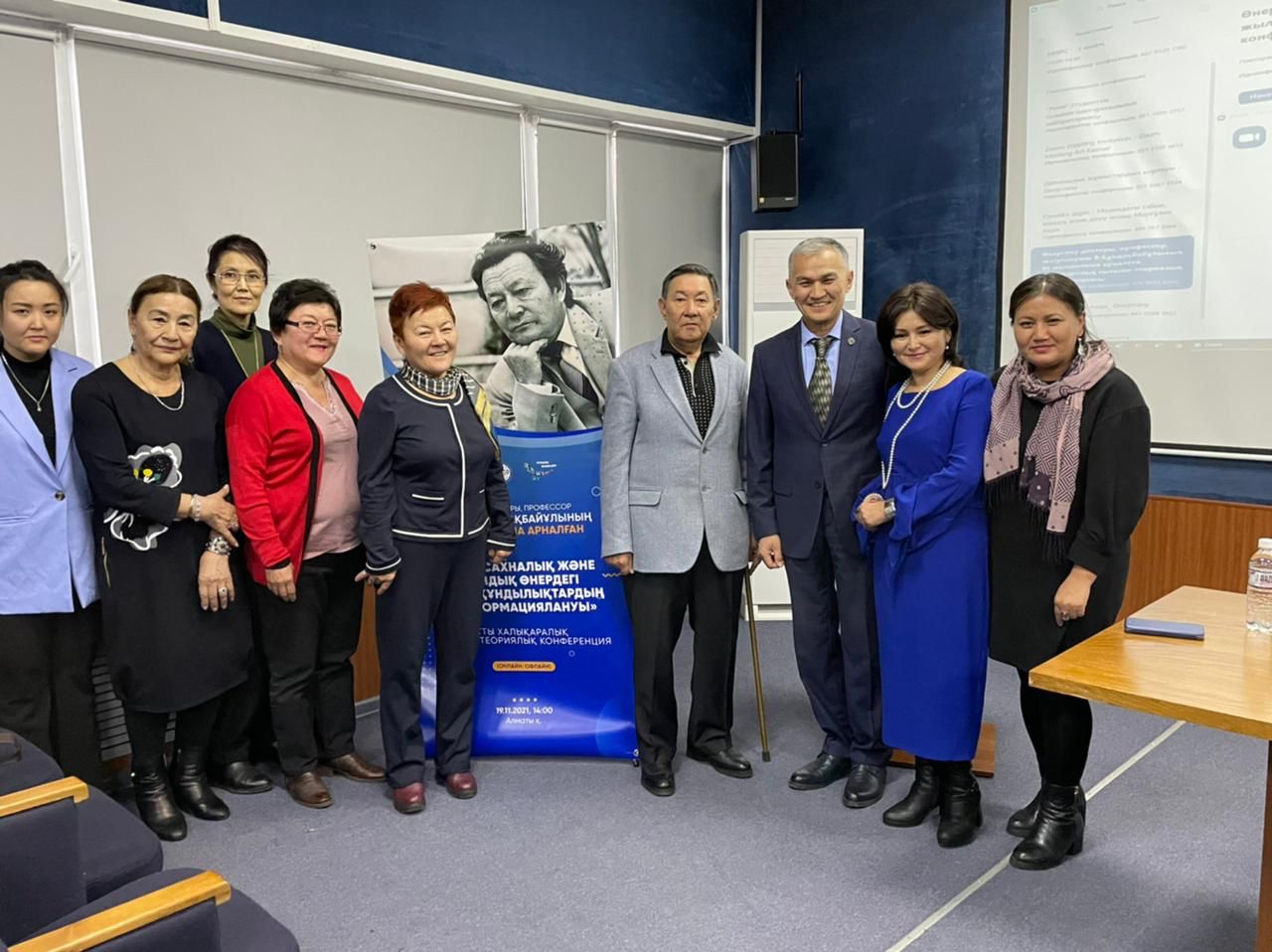 The International Scientific and Practical Conference “Transformation of National values in modern stage and screen art” was held yesterday, dedicated to the 95th anniversary of the Doctor of Art History, Academician of the Department of “Eurasian Studies” of the Russian Academy of Natural Sciences, laureate of the Ch.Valikhanov of the National Academy of Sciences of the Republic of Kazakhstan, Honored Worker of the Republic of Kazakhstan, Doctor of Art History – Professor Bagibek Kundakbayuly. In this event, conducted jointly with the Institute of Literature and Art. M.O.Auezov and the Kazakh Academy of Arts named after T.K.Zhurgenov were invited by well-known domestic and foreign scientists, public and theatrical figures.

The moderator of the conference was Mukan Amangeldy Orazbaevich, Candidate of Art Study, Associate Professor, Head of the Department of Theater and Cinema at the M. O. Auezov Institute of Literature and Art. The vice-rector for Scientific Work of the Kazakh National Academy of Arts named after T. K. Zhurgenov Kabyl Zamanbekuly Halykov, Honored Worker of Kazakhstan, writer, playwright Sultanali Bazarbaevich Balgabayev, delivered a congratulatory speech, Candidate of Art History, Honored Worker of the Republic of Kazakhstan, Director of the Kazakh National Drama Theater named after M.Auezova – Yerkin Tleukulovich Zhuasbek, director of the Kokshetau Regional Russian Drama Theater – Baktygereev Beibut. The guests honored the memory of B. Kundakbayevich and told about his rich heritage, honest work in art and science, about his place in the world of the stage. They shared interesting memories and expressed good wishes to the future theater critic.

During the conference, Amangeldi Orazbaevich said that special congratulations had been received from the theaters of Kazakhstan.

The purpose of a specially organized scientific conference in honor of Bagibek Kundakbayev, who devoted his whole life to the study of the Kazakh theater: innovative processes in modern film studies; modern methods of studying national musical art; the significance of national values in modern art criticism. Within the framework of this program, Professor of the Kazakh National Academy of Arts named after T. K. Zhurgenova Nurpeis Bakhyt Kakievna – “The scientific heritage of Bagybek Kundakbayuly in the study of Kazakh theatrical art”, Doctor of Philology, famous Alash scholar Aigul Ismakova, Professor of Warsaw State University, Doctor of Art History Andrey Moskvin – “Modern Theater of Lithuania, Latvia, Estonia: a conversation about trauma, conflict, violence”, (England, London) director, actor Ovlyakuli Khojakuli – “Modern artist as a translator of national traditions and culture”, Doctor art criticism, theater critic from Uzbekistan Tulyakhodzhayeva Mukhabbat Turabovna – “Innovations in education in the preparation of students of theater courses”, Professor of the Kazakh National Academy of Choreography Zhumaseitova Gulnara Tazabekovna – “Development of the theater school of Kazakhstan in the aspect of studying national choreography”, Kuramgalieva Nazerke – “Professional directions in the development of the Kazakh theater” (“Kazakh theater damytudyn kasib bagyttary”), A. Orazbaevich – “New Kazakh drama: development processes and the future” (” Kazakstandyk zhana drama: damu uderisteri zhane keleshegi”). There was an evening of remembrance, which comprehensively covered the performing arts and issues of its study.

The results of the conference were summed up by B. Kundakbayuly’s relative Tuganbai Zhanysbayev. Expressing gratitude to the participants, he talked about the love of science and art, the stages of the life of his loved one.

As part of the evening, the library of KazNAI named after T. K. Zhurgenov under the leadership of Tutibaeva Elmira Ablekimovna organized a special book exhibition of the creative path of the individual.